When the Nibbler wants to feel like one of the cool kids, he heads over to Front Porch. Fitting in isn’t easy: mop-headed hipsters posing in the corner, dreadlocks swaying to a lounge beat, lipstick lesbians making out at the bar.

But this time, fortunately, there was no need to try to blend in. This time, I was there for a legitimate purpose: garlic roasted quail. Yes, yes! Eating little birds doesn’t get much better than roasted quail. Taking in the scenery as I slid into a dimly lit booth, I could practically taste that poor bird on my lips.

“Unfortunately we’re out of the quail tonight, but we have a couple specials to tell you about.”

Now, I don’t know about other frogs' legs, but the ones from Barbados are very small and very skinny. Definitely smaller than the legs of minor game fowl. “Like a crooked joint,” noted the Guzzler.

The legs came fried in a cornmeal batter, which made them appear a bit more substantial, but there didn’t seem to be enough mass or surface area to accommodate the residual grease. “Like a pile of soggy, crooked joints,” the Guzzler mumbled again. The meat was highly accessible and clean off the bone, but it was so smooth you barely felt it on the tongue.

Now, the Nibbler can certainly work with lean limbs. No problem with that. And he’s learned to deal with the extra pool of grease here and there. That’s just navigation.

But when it comes to trickery, to the downright lies those marketing folks come up with, well, that’s the last straw. Pond water, that’s what frogs' legs taste like! Plain old pond water.

Whoever said they taste like chicken probably thinks the breast is the best piece. Or, worse, they probably like turkey! No appreciation whatsoever for the sweet meat of delicate small birds! No knowledge of that glorious prize wedged right between skin and bone! 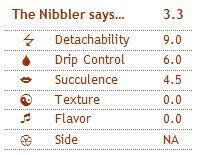 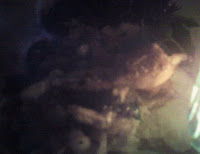 Cutting Corners in the New Beijing 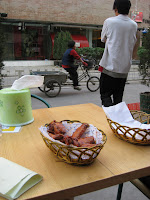 Unlike its neon neighbors around the corner, Pure Girl Bar has no line, no 50” plasmas, and no Mongolian hookers. But it does have wings.

Unfortunately it took the Nibbler three Jonnie Walkers to realize that Pure Girl didn’t actually make the wings on premise. They arrived, order by order, from an undisclosed location. Clearly I was waiting for a guy on a bike to make his way across town.

But no matter. The Nibbler has plenty of time to wait for the sweet meat between the skin and bone. My late afternoon drinks lent a sparkle to Pure Girl’s sidewalk view of modern China: hurried Westerners on cell phones, local poseurs happy and proud, African hustlers keeping their heads down, and the oldest people you’ve ever seen in your life dodging traffic on bikes. 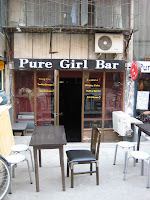 Surprisingly, the wings arrived warm. But a menu inviting you to “pick your sauce” rarely bodes well, and the Pure Girl was no exception. The sauce wasn’t bad. A nice mix of sweet and spicy, perfectly glazed on an even crisp. But you can never shake the taste of the bottle it came in. Food scientists have tried for decades to replicate that homemade sensation, in which individual flavors pop. They even have a name for it: amplitude. Pure Girl Bar suffers from their continued lack of success.
Well, that and the fact that chickens in China are poor copies of their Western brethren. They seem to have big chucks of fat in random places under the skin – a trait engineered out of existence by Arkansas mega-producers but clearly not yet globally defeated.

Doused with Jonnie Walker, I still found myself reasonably satisfied when the doe-eyed waitress offered me a Tour of Han. Much giggling ensued when I asked several times where Han was. Fortunately a German club promoter, taping a flier near my table, cleared it up: “she says you can get 2 for 1”. Xiexie! 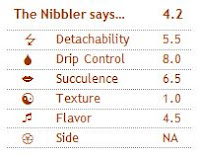 There’s nothing sadder than an aging rock 'n roll star.

With frayed carpeting and empty dining rooms, the Cal Neva Resort soldiers on as a novelty item, milking every drop it can from the days when hipsters thought it was cool.

Now, the Nibbler feels at right at home at a place that’s worn at the elbows. And he certainly understands the need to hold your head high against the quiet sting being forgotten.

But if it’s a casino without a craps table, well, then he gets cranky. And if it’s a bar with shitty wings, well, then it’s time to go.

Deep fried skin without any hint of crisp is always a problem, as the mushy exterior extends into the meat. The Nibbler was reminded of a long-neglected bowl of Cap’n Crunch, while his partner that night, the Guzzler, mumbled something about a soggy diaper.

Under normal circumstances these wings’ gristle would have sparked an offensive comment loud enough for the room to hear. But it actually seemed irrelevant in the face of a mysterious sinewy texture from skin to bone. Elastic strings, long enough to wrap around the teeth but too thin to be detected by the naked eye, sent me into contemplative silence that was only broken by some more mumbling by the Guzzler, this time something about the Donner party.

Fully doused in Tabasco, and with grease neutralizing any attempt at real flavor, each wing sent a stream of orange blood down my forearm, pooling on the video poker display and requiring Rick the bartender to assist with an occasional wipe down.

Thank God for the 14 Plasma TV’s ringing the bar, not to mention Rick’s champion mullet, to distract me enough until we got the bill. 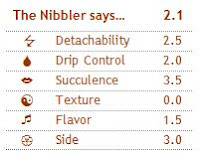 I am the Nibbler
Skin & Bones is my guide to small birds for people who like to eat them.